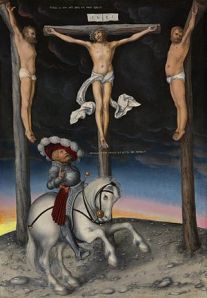 Witness To A Crucifixion

A painful, resounding voice echoed throughout the midday air.

“Father, forgive them, for they know not what they do.”

The Roman Centurion, emotionally drained and weary from watching the Jew carry his cross, became startled, then tilted his head upwards and gazed at the bloodied and tortured man hanging from the cross. Never before had he witnessed such courage and fortitude. Never before had he heard such words come from the voice of a condemned, dying man. He had seen many men crucified before, but this man had astonished him.

He turned to the other soldiers who were laughing and playing poker a few feet from the cross, then screamed, “Quiet, you fools!”

His voice growled above the windswept, sand storm that began to swirl on Mount Calvary. As darkness swallowed up the sun a chill began to run through his bones and the earth began to rumble softly below his feet.

“What is it? What did you hear, Longinus?” One of the soldiers asked him while laughing. “What did he say…what did the King of the Jews say?”

The Centurion just stood there terrified. He was a powerful man, broad of shoulder and in command of a hundred men. The words of this man on the cross, however, had rendered him powerless, making him feel as if it was he who should be asking for forgiveness. The pain and the torture he had seen this man endure for hours was something he had never witessed previously.

He could not understand how one who had been punished so severely could be asking for the forgiveness of those responsible for such torture. How could one bloodied man who had the flesh ripped from his bones so violently be so forgiving?

The Centurion’s underling became silent for a moment while staring blankly at his superior, then laughed again, and said arrogantly, “You fool. He is a Jew…a slave…nothing more!”

If it had been any other day and another man being crucified, the Centurion would have unseated his sword and driven it into the soldier’s neck. The Centurion knew, though, that what he had just saw, could only be the suffering of a man who would truly die for his god and others.

As he moved closer to the cross, he saw the man’s mother, Mary, and his brother and two more of his followers kneeling before him. It was then that Longinus heard the man’s next words.

Longinus moved cautiously, for he was rumored to be half-blind and sometimes had difficulty focusing. He watched, sympathetically, as the man’s mother began to weep softly and placed her hands on her son’s bloodied feet.

Just then, the Roman soldier who had mocked Longinus, walked over to the front of the cross, looked up at the man, and said arrogantly, “If you are the king of the Jews…save yourself!”

Longinus lurched towards the soldier and began to pull his sword. “Move you swine…and go back to the rest of your drunken fools!” The soldier quickly ran back to the others.

It had been almost six-hours since the crucifixion had begun, and Longinus was anxious for it to be over. He had seen this man before, and had been captivated by his trial and the prophecies he had foretold. It was a mystery to him how this man could still be alive.

As Longinus looked up again, the man looked up to the sky and screamed the words:

“My God…My God…Why have you forsaken me?”

Longinus froze. Never had he seen a man on the cross speak with such reverence. Surely, this man is no false prophet, he thought to himself.

The other Roman soldiers, having heard this, all jumped up and walked closer to the cross. They were curious and not laughing anymore. The man on the cross looked down at them and said:

“Then make water for yourself!” bellowed one of the soldiers, while the others laughed.

“Get him wine!” screamed Longinus to the soldier.

The soldier walked over to a bucket and grabbed a sponge from it then poured wine over it. He then placed it on a Hyssop branch, raised it up to the man’s lips and moistened them. It was painful for the man on the cross to drink, though; his lips were cracked and his jaw was broken. As he screamed out in pain, his follower known as John fell to his knees on the ground in front of him.

“Lord…your father awaits you…go to him now!” he cried. John could not bear the pain of seeing him suffer anymore.

As the sounds of mourners wailing filled the countryside, the sky grew darker and the ground began to rumble ferociously, then the man said:

“It is finished. Father, into your hands I commit my spirit.”

Then there was silence. For a moment, no one spoke. The ground stopped rumbling and the wind became silent.

Longinus took off his bronze, red, horse-hair-crested helmet and threw it to the ground before him. He then grabbed a lance from one of the soldiers and stood directly under the cross. With one swift movement, he pierced its tip into the side of the man on the cross and thrusted it in.

Blood spurted from the man’s side. As it did, Longinus suddenly cried out in pain as it fell into his eyes. He screamed in agony.

The other soldiers backed up, then one of them yelled, “Longinus, what is it, what’s wrong?”

After what seemed like almost an hour, Longinus stopped screaming, stood up, then exclaimed, “Surely, he was the Son of God!” The other soldiers looked at their Centurion in amazement, realizing, that suddenly, he could see again. His blindness had vanished.

He walked over to them, then said softly, “Help my God down!”

9 thoughts on “Witness To A Crucifixion – An Easter Story”