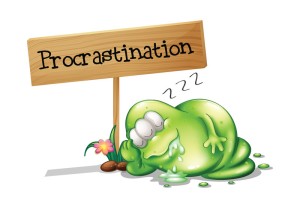 For The Daily Prompt: Back of the Queue

Procrastination is one of the most misunderstood character defects of all time. While most people view procrastination as being lazy, some people view it as a skillful art form, and a masterful way of living one’s life.

I procrastinate quite often myself. I do so because it gives me more time to work out a solution, get better resources or allow ample time for a negative chore to magically erase itself.

How many times have you thought of doing something, and then said to yourself, “Maybe I should wait before making a decision?”

Did it work out for you? Did you find yourself saying later, “Thank god I waited on saying yes to a date with that creep, because he was just arrested for being a serial killer!”

See what I mean? Sometimes procrastinating about something can save your life.

Procrastination often gets a bad rap. It is totally misunderstood and only gives some psychologists more psychobabble to write about. They will tell us that the “pleasure principle” is responsible for our procrastination. They will say we are only trying to avoid negative emotions and completing frustrating tasks.

They may be right, but that’s easy for someone to say who does not have to make a decision or perform a nasty chore.

How many times when we were growing up as kids and young adults, did our parents say to us, “Don’t rush into things. Take some time to think about it.”

Are we supposed to ignore that sound advice? Are we expected to leap before we jump?”

I know. Some of you will say, “He’s just making excuses for himself and all the other lazy people.”

Well, maybe you are right, and maybe you are only saying that because you have already fooled yourself into thinking that you have never procrastinated before, and never will.

Procrastination can be a good thing, and sometimes it can be a bad thing.

The only way to know for sure is by coming to a decision eventually when you feel the time is right. When you do, you can quiet all the naysayers by telling them that you were not procrastinating, you were simply weighing the pros and cons and searching for a viable alternative.

Even though, we all know that’s a lie.

Sometimes it works, other times it doesn’t.

The important thing to remember about procrastination is that it can have its advantages.

Don’t let anyone bully you. Perform the task or make a decision when you feel the time is right.

Even if you have to take your time.

4 thoughts on “Why Procrastination is Totally Misunderstood!”