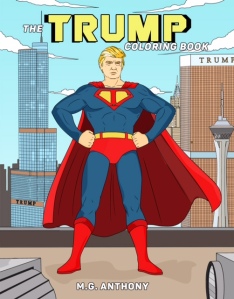 I love politics. I love reading about it, I love writing about it and sometimes at night I even go to bed and lie awake for hours mulling over the absurd and bizarre things that politicians say and do each day.

It’s not an obsession, it’s just my own quirky way of entertaining myself. Some people go to the movies, some do yoga (painfully) and others meditate or get drunk and high. Instead, I read the political sections of the NY Post, The New York Times, the Wall Street Journal and usually cry or laugh myself to sleep.

Now, you may call me a political pundit, but I like to refer to myself as an enthusiastic, political opportunist.

What’s that? That’s basically a person who uses the absurdities of politicians for their own financial or literary gain. Remember, I don’t create those monsters, I only capitalize on them with witty, political sarcasm.

This past month, however, I found a new way to relax, entertain myself and still be involved in something I love.

It’s playing with coloring books. Political coloring books specifically, that let me modify the wacky landscape of the political world and the corrupt characters within it who I so deeply love to pick apart and criticize.

I first discovered political coloring books (a few weeks ago on Amazon) while I was searching online for unique coloring books as Christmas gifts for my grandchildren.

Is that true? I kid you not. The book is published by Post Hill Press and has illustrations by cartoonist M.G. Anthony. And it’s not the only political coloring book out there. There are also coloring books about presidential candidates, Hillary Clinton and Tea Party extraordinaire, Ted Cruz.

Wow! I was like a kid in a giant candy store. I used to love coloring with crayons as a kid and would sometimes chomp down on my favorite Crayola crayon which was “Bittersweet” #FE6F5E.

Unfortunately, Crayola crayon “Macaroni and Cheese” wasn’t invented until 1993 which would have undeniably become my favorite crayon to snack on. I offer no excuses – rubber pencil erasers quickly began to leave a nasty taste in my mouth.

The “Trump Coloring Book” is an 112-page illustrative paperback that offers some humorous and satiric illustrations that only the blatant and bizarre rhetoric of the great bloviator himself could offer inspiration for.

For example, there is an illustration of Trump playing “Battleship” with North Korean madman, Kim Jung Un. Now that’s a scary scenario, no?

Can you imagine if Trump became president and Kim Jung Un began his saber rattling? Trump would boastfully call up the Fifth Fleet and order our nuclear missile silos to go into immediate launch mode.

Um…hold on Mr. President, isn’t there a diplomatic solution to this impending, apocalypse? Maybe I can color Kim Jung Un’s battleships a pretty pink so they won’t scare you as much?

And then there’s an illustration of Trump playing chess with Vladimir Putin. I thought that one was explicitly befitting. Here are two narcissistic, Neanderthals who are in love with themselves trying to outdo each other.

One thing I love about political coloring books is the freedom and lack of censorship that allows me to change the visual color schemes of the politicians they illustrate.

For example, I can go to Hillary Clinton’s coloring book and change the colors of those dreadful, executive pantsuits she wears that makes me squint my eyes and feel like I’m living back in the 1970’s.

With the 800-Crayola Crayon Pack, I can turn that pale blue pantsuit Hillary loves to wear into a more appealing color – like a chartreuse green which reminds me and Hillary of the color of money.

Being “Dead broke” doesn’t have to be bland and nasty to look at, right?

Not to be outclassed by Trump, though, Hillary Clinton has her own set of coloring books. One covers Hillary’s entire career and the other one is called “The Hillary Clinton Coloring Book Of Lies.” That edition is extra thick, costs more to ship and includes a 10 percent off discount coupon for your next lie detector test.

But I was disappointed that Hillary’s Coloring Book didn’t have an illustration of her wiping away all those secret, State Department emails from her home server with an Amazon Prime, discounted dishcloth.

Hillary may not be very digitally retentive, but at least, she knows how to “clean house” when unwanted guests are knocking at her door.

What does Ted Cruz’s coloring book have? I’m not sure, I haven’t bought it, but I’m willing to bet there’s an illustration of Ted Cruz sipping tea with a bunch of senior citizens at an evangelical, Bingo Hall.

Unfortunately, I couldn’t find any Jeb Bush coloring books. Obviously, not only does anyone want to vote for Jeb Bush, they also don’t want to waste their crayons on him.