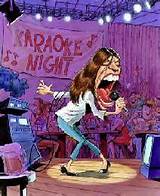 We’ve all seen it before: a local bar or nightclub sponsors a karaoke contest where people from outlying towns come to compete. Most are amateurs looking to have some fun, but some sound like they have sung all their lives professionally.

Is that fair? Should people who sing like backup singers for Mariah Carey be allowed to compete in local karaoke contests?

Of course not – it’s simply not acceptable and presents an unfair advantage.

That’s like letting Peyton Manning be the quarterback for your local bar’s football team. “Yeah, Peyton’s my 2nd cousin and he knows a little about football. Why, you don’t think he should be allowed to play?”

Equal opportunity is a wonderful thing, but when a pro competes against a novice for a tee-shirt and a $100 bill guess who’s walking out of the bar with a new tee-shirt?

Karaoke hustlers – you can find them everywhere there is a local singing competition. They’re like the pool hall hustler or the church bazaar poker pro. They have no conscience, and they are waiting to take all the money (and that tee-shirt) and walk away smiling and leaving the rest of the contestants feeling violated and humiliated.

Let’s be fair, however. Some people are naturally gifted singers, right? They make their living as secretaries or plumbers and can belt out a high note and have the vocal range of Adele.

But we know they don’t sing for a living, and that’s what makes all the difference between a fair karaoke competition and a rigged one.

That’s right; some karaoke contests are rigged; anyone who’s competed in more than one knows that. The sponsoring DJ or judge brings along someone who was a backup singer for Johnny Cash 30-years ago and has her compete against the other singers.

She gets on stage and shocks everyone with a flawless rendition of “Amazing Grace” – one that would make Simon Cowell’s jaw drop on the next “American Idol” finale.

Guess who’s winning the tee-shirt and splitting that $100 bill with the DJ?

Let’s face it, there is corruption in all competitions, amateur and pro, and karaoke is no exception.

I don’t compete in karaoke competitions (because I can’t sing) but I think for fun, one night, I might take my friend’s daughter to the local bar by my house for the next Friday night’s karaoke contest.

Did I fail to mention that she’s a professional singing coach for a famous, music country star?