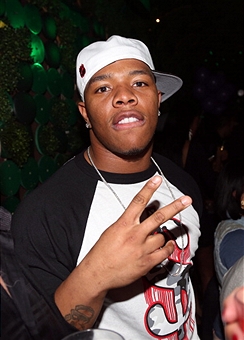 A lightning quick left hook, like one in a brutal bar fight between two men, left Janay Palmer crumbling to the elevator floor unconscious in an Atlantic City casino. As her lifeless body lay before the camera, Ray Rice, NFL running back for the Baltimore Ravens, leans down, grabs her lifeless body then drags it out of the elevator and dumps it nonchalantly on the hotel’s, lobby floor.

Rice pulled her body out of the elevator as if it was a dirty, old rolled up carpet being dragged out for the casino’s, early morning garbage pickup.

The video is frightening, and what should have amounted to some sort of conviction from an aggravated assault charge, instead resulted in a wrist-slap that is generally given to teenagers who write graffiti on schoolyard walls.

If Rice had been anyone other than who he is, he probably would have done a 30-day stint in the local county jail. But there are two sets of laws for celebrities and professional athletes these days, as we all know there always has been.

The video, acquired by TMZ is enough to infuriate any man or woman.

But instead, an Atlantic City prosecutor decided that the TKO punch from Rice did not call for any further legal action on the assault charge. Pretrial intervention is warranted they said, and an incompetent, judge signed off on the decision.

Rice was given a punishment from the county’s diversionary program, which is usually reserved for low-level, misdemeanors that don’t warrant any jail time. Rice got a 1-year probation and was ordered to attend anger management classes and a 3-game suspension without pay from the Baltimore Ravens.

But that quickly changed and the Baltimore Ravens were forced to act after a public outcry ensued that condemned the kid glove treatment given to Ray Rice by prosecutors and the NFL.

So they fired Ray Rice and canceled his contract.

Why was Ray Rice punished so lightly when he was simply, a brazen, thug who beat up a woman in a hotel elevator?

Why did the Baltimore Ravens make believe that they had not seen the same video from TMZ that showed the vicious, assault until a few days ago? You know, the same video that the entire American public had seen already hundreds of thousands of times for free on the world-wide, Internet?

The public is disgusted and tired of all the celebrities and professional athletes who get special treatment from cops, prosecutors, judges and the entire legal system. It is almost as if there are two sets of laws – one for the general public and another for sports, movie and cable TV, reality stars.

Put Joe Blow away to rot in jail for 5-years, but let the big, box office draw or NFL running back get away with a few days of community service and a slap on the wrist.

The special treatment shown to celebrities and athletes who commit serious crimes is despicable and an insult to the law-abiding public and to society in general.

Not only does it send a bad message, it also proves that the legal system in this country is as corrupt and heinous as the crimes themselves.

Lock them all up and throw away the key. Cancel their contracts. Force them to become law-abiding citizens like the rest of us and responsible for their actions.

VIP time is over.