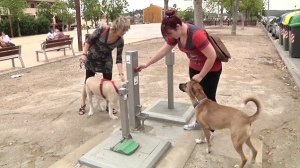 It is all about etiquette, cleanliness and respect for the environment. Even the people in the town of El Vendrell, in Northeast, Spain, understand this, and that is why the town has installed their first public doggie toilets.

Is this a dumb or an insane idea? Should we have this in America? Maybe we should or maybe we should not, depending on how you look at the issue.

Sure, lots of people will say it is good for the environment. After all, who wants to walk around the park or a city street dodging doggie poop left behind by inconsiderate, dog owners.

Not everybody picks up after their dogs, right?

Although there are fines in most municipalities for stray doggie poop, lots of people leave it behind because they don’t want to go through the hassle of cleaning it all up or appearing unfashionable as they walk around with a pooper-scooper.

Despicable, but it happens.

There are other things to consider though, like the dogs themselves.

Have you ever watched dogs when they squat down to take a poop? It is almost automatic how their heads bow, and their eyes lookup at you with a humiliating expression.

You can’t blame them though, who wants to be stared at when they are taking a poop?

At least, if there is an official or reserved area for doing this, dogs will not feel so uncomfortable anymore. Dogs may also view it as an attractive activity. Competing for who is the king pooper dog in the neighborhood could give a dog important, social status.

While all the dogs wait in line, surely they will all be critiquing each other’s waste disposal skills, along with the measure and substance of the product.

That may seem silly to you, but to a dog it could have important consequences in the local, canine community.

Surely, politics will also become involved. If public doggie toilets were to be installed, multi-million dollar contract bids to build them would begin, and following that would be public, doggie-toilet corruption. Every politician from the city to the state would have their hands out looking for a bribe for the awarding of the contracts.

There is also the waste disposal carting end to consider. Someone would have to service and maintain (empty) the toilets. I think we all know who will probably be awarded those contracts.

Also, a politically charged and heated debate would most likely begin between liberals and conservatives. The liberals will say that gay dogs (aren’t they all) aren’t being treated as fairly as the straight ones. On the other hand, the conservatives will say that the religious dogs are having their “religious expression rights” being taken away because Christmas displays are not allowed to be put up anywhere near the public, doggie toilets.

Anything crazy could happen, and especially in today’s political and socially charged, society.

Public doggie toilets could be a good thing, or they could be a bad thing. People will complain that they do not want the toilets installed anywhere near their homes – citing odor and noise issues. Others will say that the accommodations for handicapped dogs are not up to par.

I personally feel that public, doggie toilets are a dumb idea. Dogs have done their business out in the city streets and parks for years, and we all seem to have grown quite accustomed to the practice.

Do we have to change everything in our society today?

Some people may want to fundamentally change our country, but when it comes to dogs doing the nasty, how they do it, and where they do it seems to be something that does not need to be improved.

5 thoughts on “Pros And Cons About Public Doggie Toilets”