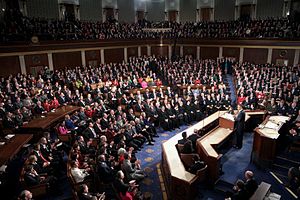 Tonight is the “State of the Union Address” – an annual event that Supreme Court Justice, Antonin Scalia, refers to as “A childish spectacle.” It is when the President of the United States of America stands in front of Congress and the entire nation and tries to convince us that all is well in America.

It is equal to a pep rally at a stockbrokers convention where they are convinced to sell shareholders billions of dollars in useless stock. Justice Antonin Scalia has it only partially right – it is not only a childish spectacle – it is also the definitive art of deception targeted at millions who will undeniably fall for more than a few of its lavish trimmings.

Lucky for us, after we get to hear the President’s comments we then get to hear a member of the opposing, political party tell us that the President’s report was wrong. Thank God for that – if it was not for that rebuttal we might still all believe we are living in a utopian society.

I always treasure this part of the address – it reminds me of a used car salesman I once knew who opened up a used car lot right across the street from an auto graveyard. He will give you lots of promises – but not much hope for the future.

One of the best parts of the State of the Union Address is when the President enters the House Chamber. As the President walks down the aisle towards the Speaker’s rostrum, he stops to shake hands with members of Congress who both love and despise him.

It is fun to watch to see who the President acknowledges and who he ignores. “You stood here for hours waiting to see me? Screw you pal, it is because of you my friend’s bill studying the sexual practices of hummingbirds lays dead on the Senate floor!”

The applause usually goes on for so long that women can manicure half their toenails before it is over. This is usually the same time that illegal aliens who just jumped over the border feel like patriotic and proud Americans. It is also when old men grumble, wiggle in their recliners, talk about World War II and when the American flag stood for something.

Finally, the President reaches the podium then hands two manila envelopes to the Speaker and the Vice President. Supposedly, they contain copies of his State of the Union Address.

I often wondered what was really in those envelopes. Perhaps…a half-dozen, complimentary tickets to the next Super Bowl?

Finally, the President is introduced by the House Speaker. The roar is deafening. It has been said by some congressmen that they can feel the floor rumbling and hear the trumpets at the Roman Coliseum as Caesar himself appears over his minions.

More applause…endless applause as millions of Americans decide if they have the time or not for a bathroom break.

And then there is that long, painful period when the President brags about all the wonderful things he has accomplished during his last four years in office. It’s amusing to watch how one-half of Congress rises and cheers while the other half remains seated.

One of the more special moments of every State of the Union Address is when the President introduces his guests. Some of them are brave and accomplished Americans, some are war heroes and some are put there purposely to piss certain people off.

The State of the Union Address has become, sadly, nothing more than a recap of everything we already know. In the age of the internet, we usually know the contents of the whole speech the morning before it happens. We know how the media, how the political pundits and how the rest of the world will interpret it all.

So, then what is the purpose of it anyway?

Pomp and Circumstance…and nothing more.

Sometimes it is fun. It is fun to watch the leader of the free world convince himself that he has us all fooled. It is like watching that used car salesman across the street from the auto graveyard trying to convince us that he can sell us a car that will not end up across the street in six months.

2 thoughts on “The “State of the Union” Address Follies”