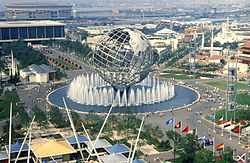 Whenever I smell waffles toasting I think about the 1964 to 1965 World’s Fair in Flushing, Queens, NY. It’s was a great time then. I was only 7 years old when the fair opened, but I remember it well. It ran for only two years but makes up such a great part of my childhood memories. Even now, 49 years later, the sights and sounds of the fair remain in my mind and probably will forever. It was the waffles though, that stay in my memories of The World’s Fair the most. The smell of those delicious Belgian waffles being cooked at The Belgian Village filled the grounds of The World’s Fair and for miles around. I know, because we lived just a few miles from the fair and could smell them from our backyard even when we were home – if the wind was blowing the right way.

The Belgian Waffles at the World’s Fair were served hot with strawberries and confectioner’s sugar sprinkled on top with whipped cream for only $1. I remember me and my sisters would beg grandma and grandpa to take us to The Belgian Village almost on a daily basis so we could devour some more of those delicious delights.

Those were good times back then and two years of the best! I remember being so proud of my dad who was one of the construction foremen in charge of building The Billy Graham Pavilion at the fair. Billy Graham himself came to our home one day to visit and thank my dad. I remember the excitement out in the street that day when Billy Graham himself pulled up in a chauffeured limousine escorted by a police car and stopped at our house. I didn’t really understand who he was at the time but I knew he was somebody important. I remember he brought my dad a case of booze for gratitude, but please don’t quote me on that.

The greatest part of the fair, however, was seeing and meeting all the strange people from different countries. I say strange because you never knew what language someone was speaking when they walked up to you. But it was the waffles that I remember the most. If I put my head back now and close my eyes and listen to the wind blowing outside, I can almost swear I smell the faint odor of Belgian Waffles seeping through the air.
© Joseph E Rathjen – All Rights Reserved – 2013

Here are some of my blogger friends stories on smells: